“In terms of the Qosmio laptop brand, innovation is the key ingredient,” said Jeff Barney, vice president and general manager, Digital Products Division, Toshiba America Information Systems, Inc. “The addition of the TOSHIBA Quad Core HD Processor marks a watershed moment in the multimedia and HD segments. Qosmio G55-Q802 laptop PC users now have the power and ability to control and manipulate their personal content with unmatched precision and speed while also enjoying their full DVD collections at resolutions up to 1080i.” 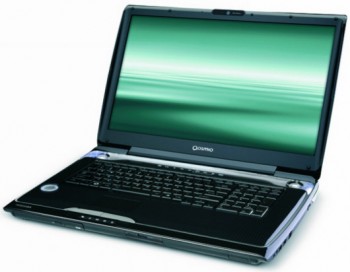 The TOSHIBA Quad Core HD Processor was designed to better serve the creative process by alleviating the intense burden that’s placed on the CPU while handling a wide range of multimedia tasks, such as video transcoding. The complex task of transcoding and encoding a personal video project monopolizes a majority of the processing power of today’s advanced computer systems. Through the addition of the TOSHIBA Quad Core HD Processor, along with the combined strength of Intel’s latest Core™2 Duo processor1 technology and the NVIDIA GeForce® 9600M2 GT graphics card, tasks that once took hours to complete now are accomplished in a fraction of the time with Toshiba’s Qosmio® G55-Q802 laptop PC.

This revolutionary Cell processor technology was co-developed by Toshiba, Sony and IBM, and is best known for its use within the popular Sony PlayStation® 3 and various supercomputers. Branded the Toshiba Quad Core HD Processor it currently consists of four cutting-edge, distinctive proprietary features:

The Qosmio G55 series laptop is also available without the TOSHIBA Quad Core HD Processor, but the series was collectively designed to enhance the digital lifestyle by providing cutting-edge innovations that are built upon the backbone of sharp picture quality and pristine sound reproduction. In addition to the technological advancement of the TOSHIBA Quad Core HD Processor, the Qosmio is built around an expansive 18.4-inch diagonal widescreen TruBrite® high-definition display that sports a true 16:9 aspect ratio. Users can take advantage of more of the display and enjoy their widescreen movies with less of the black bar letterboxing, which frames a picture on other displays. To further enhance the visual experience, the Qosmio G55 laptop PC sports two premium Harman Kardon® stereo speakers, a sub-woofer and Dolby Sound Room technology, which allows users to experience their content in surround sound. The Qosmio can be seamlessly integrated into a user’s home theater system for a complete surround sound experience thanks to its REGZA LINK™ HDMI technology while empowering users with simultaneous instant device configuration and the ability to control REGZA LINK enabled devices, such as Toshiba’s REGZA™ HDTVs and a Qosmio laptop, with a single remote.

The Qosmio G55 laptop PC has several design features that magnify its cutting edge nature, such as its striking Fusion™ finish with Vibe design, white-LED FeatherTouch multimedia buttons and a flush-mounted Touchpad. These external features do much to enhance the overall quality and premium feel of the new Qosmio, which has a starting price of $1,299.994.

For the first time, Toshiba will offer users the option of configuring their laptop to run either a 32-bit or 64-bit5 version of Windows Vista, depending on a user’s preference and intended computer use.

Transcoding — The included Ulead® DVD MovieFactory® 5 for TOSHIBA has been optimized to take advantage of the Toshiba Quad Core HD Processor to dramatically reduce the time needed in high-definition video editing.

The Qosmio G55 laptop PC is available from a variety of major consumer electronic and computer stores nationwide or directly from Toshiba at www.toshibadirect.com. Detailed product information is available at www.explore.toshiba.com/G55.

The Qosmio G55 series is available in the following configurations:

The Qosmio G55 series is available with a one-year standard limited warranty9, which includes carry-in support at Authorized Service Providers throughout the country or packaging and delivery of the product to a centralized depot for prompt turnaround service from any of the 4,460 UPS Stores and Mail Boxes Etc. locations nationwide. Customers can also choose to upgrade the notebook’s service plans, including up to four years of extended warranty coverage.

3. 10Xfaster. Up to 10X faster claim is based on comparison between a Toshiba notebook with and without TOSHIBA Quad Core HD Processor. Performance may vary depending on product model, configuration, video content/format/settings as well as the performance variations of individual hardware components. Results were achieved on select models and configurations tested by Toshiba at the time of publication.

9. Warranty. The terms and conditions of Toshiba’s standard limited warranty, and extended warranty and service upgrade plans are available at www.warranty.toshiba.com.

10. RoHS. This product is compatible with European Union Directive 2002/95/EC.