The latest G750 models feature a 4th-generation Intel Core i7-4700 processor and the brand-new enthusiast-level NVIDIA GeForce GTX 800M Series GPUs, and include exclusive Asus TurboMaster GPU-overclocking technology to deliver desktop-grade gaming performance. With its awesome looks and components that are designed from start to finish with the needs of serious gamers in mind, G750 sets the standard for amazing portable gaming performance. 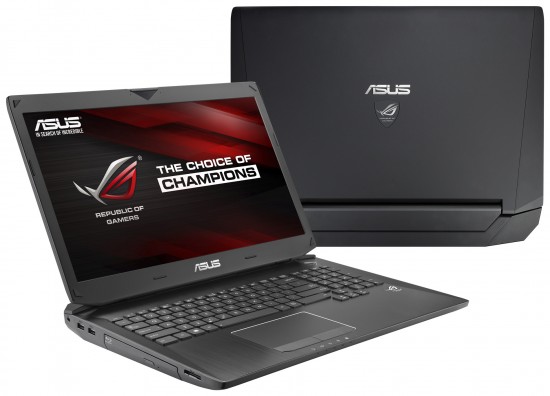 The new GeForce GTX 800M Series GPUs with up to 4GB of GDDR5 video memory, certainly delivers incredible gaming power, and the new G750 models — featuring up to the top-of-the-range NVIDIA GeForce GTX 880M GPU — take this even further with exclusive Asus TurboMaster technology. TurboMaster lets users easily and safely overclock the GPU by up to 5% for even more extreme performance — perfect for those times when every frame-per-second is critical.

The GTX 800M Series GPUs also include support for two NVIDIA technologies — Battery Boost and ShadowPlay — that are specifically designed to enhance mobile gaming. NVIDIA Battery Boost automatically gives up to a 2X improvement in battery life while gaming, and NVIDIA ShadowPlay allows gamers to capture and share their greatest gaming moments — automatically. “The Asus G750 continues to push the boundaries of performance and style.” said Brian Choi, Senior Product Manager at NVIDIA. “With the ultra-fast GeForce GTX 880M GPU delivering the most gaming horsepower to notebooks, these new notebooks are sure to be a gamer’s dream.”

Heat is one of the biggest enemies of performance notebooks. That’s why the new G750 notebooks have an upgraded thermal solution that uses intelligent dual independent fans with copper heatsinks, so they will never lose their cool in the heat of battle, even during those all-night gaming sessions. Both the processor and GPU each have their own independent and powerful heat-pipe-based cooling that is automatically optimized according to the demands on the system, making G750 the coolest gaming notebook ever — in more ways than one! And what’s more, the unique rear-vented thermal design means that distracting fan noise is kept to a minimum while maximizing cooling efficiency — so even if the action is hot, G750 won’t be.

The new G750 models add support for the latest 4K/UHD (ultra-high-definition) displays, and its Trinity display technology means that up to three separate external displays can be connected simultaneously using the HDMI 1.4 and DisplayPort 1.2 interfaces. This not only allows incredible multi-screen gaming possibilities, but is also fantastic for watching movies or even multitasking during play.

Wireless network performance is critical for uninterrupted online gaming, so G750 uses the very best wireless solution available – the Killer Wireless-N 1202. With its dual-band, dual-stream MIMO (Multiple-input, Multiple-output) design, G750 delivers rock-solid speeds of up to 300Mbit/s on both the 2.4GHz and 5GHz frequency bands. And with built-in Bluetooth, Wi-Fi Direct technology for direct (peer-to-peer) connections and Advanced Stream Detect technology that intelligently prioritizes game-related traffic, G750 keeps players ahead of the game.

Using the power of Asus SonicMaster audio technology and the unique Bass Eye built-in subwoofer, G750 delivers majestic full-range 2.1 sound that puts gamers right in the center of the action. Precision control of audio settings is provided by the exclusive ROG AudioWizard with its five preset audio profiles, so getting the perfect sound for any kind of entertainment is simple. Users can also create their own custom settings for instant use at any time.

For the ultimate sound experience, Asus realizes that headphones are the gamer’s favorite choice, so G750 has a powerful hi-fi-quality headphone amplifier with support for high-end 600ohm headphones.

Asus Republic of Gamers understands exactly what gamers need in a notebook, and delivers it. From the Stealth-inspired low-profile chassis design, all the way through to its anti-glare screen, large multi-touch touchpad and cool white-backlit one-piece keyboard with long-travel (2.5mm) keys, G750 is built for those who demand the best.