“We designed the S7 to be the best touch Ultrabook in the world, bar none,” said Jim Wong, Acer Corporate President. “We listened carefully to users to find substantial ways to make it even better.” The re-engineered S7 delivers improved battery life of up to 7 hours, a 33% increase from its predecessor. Its new light-sensing EL backlit keyboard is also refined, with a deeper keystroke for more natural and comfortable typing. Plus, thanks to 2nd generation Acer TwinAir cooling technology, the noise at maximum load is more than 20% lower than the previous S7, keeping the system quiet and cool. 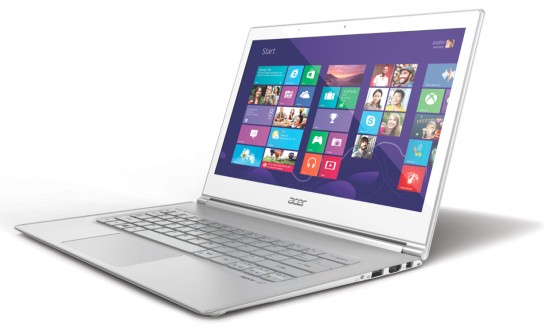 Acer's new S7 supports Intel WiDi technology, which allows users to extend their laptop screen to a TV or big screen without a cable. With this feature, S7 users can stream video on their living room screen and open a new window on their computer and to work, bringing a new dimension to multitasking.

The Aspire S7-392 features a Full HD IPS 10-point touchscreen with 1920 x 1080 resolution, putting touch control at users' fingertips. In addition, IPS technology shows consistent and accurate colors at viewing angles up to 170 degrees. Taking advantage of the touch benefits offered by Windows 8, the touch-enabled screen on the S7 can be opened a full 180°, and the image orientation reversed with a simple hotkey combination for easy touch-and-show sharing. Acer’s first 10-point touch WQHD display will also be available on the S7, with IPS technology squeezing a very impressive 2560x1440 resolution into a 13.3-inch screen.

Acer's new S7 supports Intel WiDi technology, which allows users to extend their laptop screen to a TV or big screen without a cable.

The S7 Ultrabook remains impressively slim and light, measuring only 12.9 mm thin and weighing 1.3 kg. It is constructed from premium materials and features a dual-torque, T-shape hinge frame design to ensure wobble-free touch use. Its Gorilla Glass 2 surface is smooth to the touch, beautiful and thin, yet strong, scratch resistant, and easy to clean. The new S7 features a unibody design made from a single block of aluminum using a process that saves energy and material; the result is an ultra-thin chassis that is super tough and roadworthy.